Types Of Axes You Should Know

by MyUnfinishedHome Staff
MyUnfinishedHome participates in several affiliate programs. If you click links on our website and make a purchase, we may earn a commision. Learn More

Axes come in different models, sizes, and purposes. Therefore, you want to make sure you know the different types of axes to find the right one for your job.

The axe is one of the oldest inventions of mankind. In the past, it was used as a weapon, allowing fighters to win even the most dangerous battles. Over the years, its function has expanded to many other areas of human activity, from hunting animals and digging through soil to chopping up firewood and cutting down trees.

Types of Axes and Uses

Axes are undoubtedly a must-have tool in the yard or outdoor activities like camping. If you’re looking to buy the best axe on the market but don’t know which one you should get, we’ll discuss them in detail to help you make an informed choice.

If you’re in the market for the best types of axes for splitting wood, you’ll obviously want to go with a splitting axe. It is easy to distinguish with its larger blades and a wider profile. It also has a long handle to allow a good swing and cuts with the grain, resulting in split woods rather than chopped ones.

Although some may think that a splitting axe and a maul are similar, as they share the same purpose, there are actually a few notable differences between them. One of them is the weight. Splitting mauls are slightly heavier than axes, weighing between 6-8 pounds against a splitting axe’s 3-6 pounds weight.

When it comes to the head design, a splitting axe has a tapered head with an extremely sharp blade. This is why not only can it split wood but also cut it efficiently. On the other hand, a spilling maul has a bigger, blunter head. Due to its increased weight and size, it will take more effort and muscles to split wood than an axe.

Hatchets are a single-handed striking tool featuring a sharp head for cutting on one side and a hammerhead on the other side. It may be lightweight and is designed to be used by one hand, but it offers many purposes.

Unlike other axes you can find, the hatchet is considered a scaled-down version of axe that you can easily carry around. It is compact and can perform a variety of tasks, especially when paired with a pocketknife.

Despite being small, a hatchet is still useful for splitting and chopping wood, though it may take extra effort to cut more prominent and thicker woods. It is also ideal for carving wood and snapping odd dry branches quickly.

The felling axe features a flared-shaped blade with a thin, sharp tip. Its head weighs between 2-4 pounds and sits at the end of a long handle, which allows a more powerful swing with better leverage for an efficient cutting.

The blade of this type of axe is designed to cut against the wood grain, so you should swing sideways at the trunk of the tree. Its design provides emphasis on generating a strong swing for maximum impact.

Overall, a felling axe is a powerful tool capable of felling small branches and trees and even very thick logs. However, it may not be a good option for splitting, as its blade tends to get stuck in the wood.

Sometimes referred to as a carpenter’s hatchet, the carpenter’s axe is relatively small but slightly larger than hatchets. It may not be ideal for chopping trees but has been used in log-building and traditional woodworking.

This type of axe usually features a finger notch that allows a choked grip for more precise control. Traditionally, it has a straight-edge blade with a flat butt, which is used as a hammer.

The blade is designed to be thin to promote accuracy. Its cutting edge is straight and extended so that users can make the most accurate cuts. Such features make it an incredible tool for carpenters and woodworkers.

As the name suggests, a broad axe is known for its large cutting head. Its head is similar to a wood chisel in shape, with one flat side while the other is sharp and bevelled. Its design helps users cut a flat surface on the wood or log and enables precise cuts using short, controlled strokes.

The broadaxe is often used in woodworking, as it provides better control required for the job. Woodcarvers use it for shaping or hewing logs, thanks to its sharp edge and single handle that offer plenty of control for creating artistic designs.

The length and style of broad axes vary. Some have short handles and canted heads, while others feature a straight, flat cutting edge and a long, full-length handle. They are heavier than most standard chopping axes, weighing around five to eight pounds. 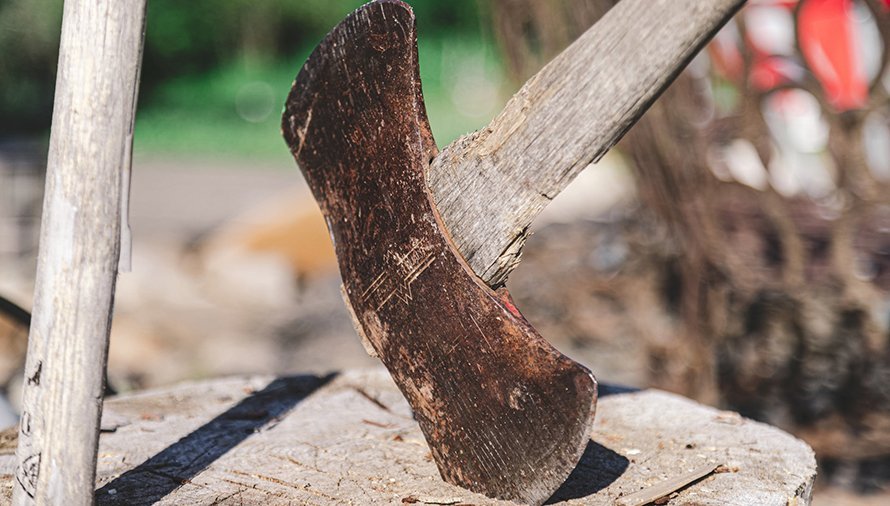 One of the unique types of axes is the double-bit axe, featuring two blades on each side of the head. One cutting edge is kept in a sharp condition for chopping woods and logs, while the other is often rather blunt.

This type of axe is ideal for cutting lumber and chopping firewood for its accuracy and defined sharpness in cutting. Since it has two cutting edges, it is usually heavier than other axes, allowing it to create quicker and more accurate cuts.

Tomahawks were originally invented as weapons and popular among Native American tribes. They have been used in battles and are known for their rich military history. Eventually, they have been utilized for other everyday tasks, such as chopping, digging, hunting, and cutting.

Recently, this single-handed tool has become more popular for camping. Since it is smaller and lighter than hatchets, it is easier and more convenient to carry around. Besides self-defence and warfare, the tomahawk axe has been an indispensable tool for excavation, camping, and other outdoor and utility applications. 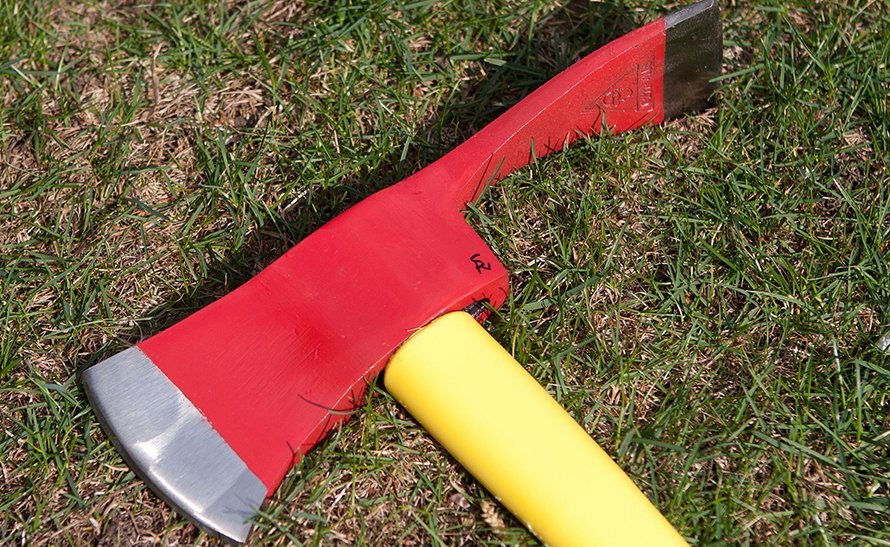 The Pulaski axe was named after Ed Pulaski, a Forest Service ranger who saved many of his crew of firefighters during the Great Fire of 1910. Its head has a sharp axe blade on one side and a grubbing hoe on the other.

As with other axes, the Pulaski has gone through many changes over the years with some style and designs different-shaped hoe ends, reinforced how ends, and more. It has a weighted head that enables users to break through roots and logs with short, quick chops. But thanks to the full steel core on the wood handle, it is strengthened and perfectly balanced with the axe head for a smooth chop.

Also called a roofing hatchet, a roofing axe is a craftsman’s tool primarily used in roofing. It is versatile with its double-sided head – one is a blade for cutting shingles, and the other is a magnetized hammerhead for pounding in nails.

Professionals choose this type of axe when working on roofs since they don’t have to carry around different tools when working. Since the hammerhead is magnetized, you wouldn’t need to hold the nail in place, making the job a lot easier.

Although you may not be into hunting, a hunter’s axe is still an incredible tool to have at home. It is specially made for hunters, serving great purposes essential for survival, like chopping wood, cutting meat, and skinning animals.

The hunter’s axe has a sharp blade and a poll, which is the side of the head opposite the cutting edge or blade. It is carefully burnished and rounded to help remove the hide from an animal.

If you are looking for a hunter’s axe, you will want the ones with a grooved handle. It offers improved grip even if your hands may be sticky or wet. The handle ergonomics is also an essential safety factor since an unwieldy axe could cause serious harm if it comes into contact with any part of the body.

At this point, it is hoped that you’re armed with the knowledge of axes and have a better understanding of the different types of axes and their uses to make the right purchase. Note that not all models and products you can find on the market are the same, so it is always a good idea to do your research to have a purposeful shopping experience.

We are a team of enthusiasts thriving to provide you with helpful advice on buying everything you may ever need to finish your home and make it a lovely place.

Weeds are a common enemy among gardeners and farmers as they muscle out desirable plants by competing for space, nutrients, and other resources, such as water and fertilizers. Although various control methods have been introduced in the past, weed problems remain a major challenge. Over 200 weed species have even developed resistance to herbicides used […]

How To Use A Pole Saw

Knowing how to use a pole saw should be your priority when dealing with this sharp tree trimming tool. Caution must also be observed to avoid accidents or injuries. A pole saw is a mini-saw mounted on a long handle that can be extended to around ten to twenty feet. A manual pole saw is […]

Tree Trimming Tools You Need To Know And Own

Did you know that trees can help increase your property value? It only proves that not only are they visually appealing but also are an incredible investment. But to take advantage of their long-term benefits, proper trimming must be considered to ensure that your trees remain healthy and don’t overgrow. Extra branches and uneven growth […]

How To Extend The Life Of A Garden Hose

Whether you’re into gardening or not, a garden hose is an essential item you should have at home as it serves many purposes, from cleaning to watering. On average, a quality garden hose should last for up to ten years. It is versatile, which is why it is considered an indispensable investment for every household. […]

Which Watering Methods Should You Use In Your Garden

Taking up gardening is one of the most wholesome hobbies. But even though it seems simple, it is hard work, especially when it comes to garden watering. In order for most plants to survive, you will need to water them regularly. This includes plants that can relatively tolerate drought. For this reason, it is crucial […]

How Often Should I Water My Lawn

Watering your lawn may seem like a simple task. But knowing how and when to do so can mean the difference between achieving a green, healthy lawn and brown, dying grass. All living things need water to survive, and your lawn is not an exception. You may think that having the best expandable hose, sprinkler, […]